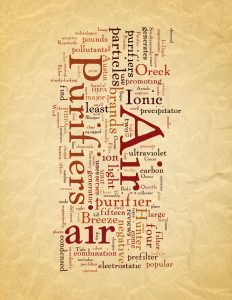 Some home air purifiers come with ionic ionizer units in addition to any other filters they might have.

These ionic ionizers are promoted by some manufacturers as being an excellent and safe way to clean the air in your home, but many environmental health organisations are not so sure that they even work very effectively, let alone work safely.

I am going to consider the effectiveness of ionic air purifiers in a separate article and so I am not concerned with this question in any great detail here. I am, however, very sceptical of the claims that these ionic air purifiers work effectively and personally would never buy one for that reason alone.

As a parent of 4 small children, however, by far the most important factor for me to consider is whether or not these ionic air purifiers are actually safe to use in the home.

So, the main question that I am going to consider in this article is simply “are ionic air purifiers safe?”

What Are Negative Ion Air Purifiers?

Negative Ion Air Purifiers аrе machines designed to improve the air quality in your home. Unlike other air purifiers, ionizer units do not actually “filter out” air particles by trapping them. Instead, they rely upon a process that is supposed to make them fall out of the air and onto the floor.

This sounds great in theory but, even leaving aside the issue of whether or not this process is actually effective at removing large amounts of unwanted air contaminants, there is one very big downside to some negative ion air purifiers.

The big problem with some ionic air purifiers is that they emit significant amounts of ozone gas into your home as a by-product of this process and this can cause serious problems for anyone living there.

Ozone gas is comprised of 3 oxygen atoms and its 3rd atom can detach itself and react with other molecules in the atmosphere and, more importantly, within your body.

The problem is that this 3rd oxygen atom can react with organic material (ie. organs) inside the human body and potentially cause significant health problems.

Ozone gas is produced by many different natural and man-made processes and, so, there is no way to avoid inhaling some quantity of it. The problem arises when humans are exposed to too much ozone gas.

The Environmental Protection Agency (EPA) is so concerned about the possible side effects of ozone gas in the home that it has classified it as a “toxic gas”.

Moderate quantities of ozone gas inhaled by otherwise healthy adults can cause them to suffer chest pain, throat irritation, shortness of breath, and coughing fits.

Whilst Ozone gas inhalation is potentially harmful to anyone, there are certain groups of people who should be even more careful to avoid such exposures. Ironically, the people who are most vulnerable to the side effects of ozone gas are those who are most likely to buy an air purifier in the first place.

Air Purifiers are often bought by people who suffer from asthma and by parents who want to ensure that their children are breathing in cleaner air at home.

The problem is that asthmatics and small children are particularly vulnerable to the harmful effects of ozone gas and I would definitely keep well away from an ionic air purifier if I was within one of those categories, which I am.

These more vulnerable groups of people can find that their asthma symptoms and their ability to fight off infections are adversely affected by the very machine that they thought was going to improve those symptoms.

So, in summary, whilst the full long-term effects of ozone gas inhalation by humans in the home are not fully understood yet, the evidence that ozone gas is harmful to humans is very strong.

Which Air Purifiers Are Safe?

Thеrе аrе a lot оf different types of air purifiers tо choose from and the good news is that some of the most effective machines are also some of the safest. Many air purifiers do not emit ozone gas (or emit very small amounts from extra units that can be switched off) and I would always chose one of those machines over an Ionic Air Purifier or Ozone Generator.

The amount of ozone gas that is emitted by Ionic air purifiers varies between machines and some might be safe to use. I will not, however, be taking that chance.

So, if уоu dоn’t wаnt tо compromise уоur health аnd thаt оf уоur family, you need to find a high quality air purifier that is effective in removing unwanted air particles from your home without damaging your health in the process.

I always look for an air purifier that uses a combination of a True-HEPA filter and an activated carbon filter as its main weapons against unwanted air particles. Unlike Ionic Air Purifiers, there is strong evidence that True-HEPA filters and activated carbon filters do in fact work to remove large quantities of unwanted air particles from the home. There is also some evidence that they can alleviate asthma and allergy symptoms in some people.

You can find my reviews of some safe and effective air purifiers by clicking on these links:

If you have any opinions to share on the question of “Are Ionic Air Purifiers Safe?”, please just leave a comment in the box below.